I’m still working on catching up on my posts after some WordPress debacles. This one about my third week highlights my first deployment to Jefferson City, MO!

Tuesday, May 28 | Bruce, our Executive Director, started off this week’s 0700 meeting (a rarity, my impression) with a tone of “this could get ugly.” Forecasts called for more bad weather and historic flooding in the days ahead. Possibilities seemed high that all teams could deploy straight from their conservation sites in response to either or both. The Nebraska flooding “mission” had been extended, too, with more details to come (numerous “Nebraska Strong” AmeriCorps t-shirts suggest that several ERT members responded to flooding there before).

There’s also some trouble with what is collectively known around the office as “Montana,” the service year wrap-up trip where ERT members do conservation projects before their graduate ceremony. Long-standing individuals who have partnered with ACSTL for 19 years are retiring and the new folks seem hesitant to let us have our usual summer sites. It sounded like a delicate, bureaucratic fight was going on behind the scenes to make sure ACSTL’s legacy is protected with the Montana Forest Service. I can only hope no major changes are made before I have the chance to experience it with this year’s ERT members!

Not long after the meeting, Bruce pointed to the other VISTAs, Jimmy and Jane, to deploy to Clarksville to sandbag for a few days. It’s true what they told me—ACSTL must be ready to deploy within hours! Bruce informed me that United Way may be putting together a state-wide survivor database and/or call center that I might need to help our Disaster Services Fellow, Brenna, with. Still important, but not as exciting; I just wanted to get out there! What did I need to do to be considered ready for deployment? I had to find out.

Later, Bruce came back with the possibility that Brenna and I might head to a MARC—a Multi-Agency Resource Center where government and non-government agencies and organizations post up in a centralized location to assist the public—in Jeff City later in the week. My spirits lifted. 🤩

Plans changed by the hour and many unknowns remained. All I could do was keep going on the May newsletter and website. I left the office with its A/C circulating only hot air, warnings and storm cells blinking on the radar like Christmas lights, and folks waiting to deploy from the office (the classic “hurry up and wait” of disaster response). I was, admittedly, happy to be on my way home, hot and muggy, though, my commute would be.

It’s hard to wrap my head around what has already happened weather-wise since I started two weeks ago. As of this morning, CNN reported that 321 tornadoes have touched down in 17 states, from Texas to Michigan and Colorado to Ohio. As for flooding, there are currently 194 reports of minor flooding, 106 moderate reports, and 67 major reports—several of these along the Missouri, Illinois, and Mississippi Rivers.

Headlines seen in my news feed today included things like:

Wednesday, May 29 | I arrived at the office after a rainy commute to find my fellow VISTAs gone to Clarksville, leaving our little office all to myself. I caught up on the latest headlines—large tornado strikes near Lawrence, KS; 8 tornado reports a day for 12 days is a new record; Morganza Spillway set to open soon—then went back to work on my new website draft and updating the current website’s map of where ERT members are this week. I heard one team got pulled from conservation work to help with sandbagging in Clarksville. Would more deployments follow?

Just before lunch, my supervisor waltzed into the VISTA office and asked me,

Of course, my answer was yes! My first deployment!! For those of you who have known me a long time, you know this is a dream come true for me: to be part of an organization that sends me out to help communities recover from disaster. As added motivation, part of me also wants to show that I don’t shy away from the disaster zone, even though I wasn’t in ERT. I came to play, y’all.

Jeff City is setting up a MARC Thursday and Friday to help residents connect with recovery resources, and I’ll be there to register survivors. My supervisor and I went through some PowerPoints to get me familiar with the MARC layout and refresh some during- and after-disaster self care tips, and I read over a Psychological First Aid review. I found some other things to do to get me to the end of the day, then I headed home to pack!

I  made it back just minutes before the first drops of another wind-driven flash flood blew through the neighborhood. I am so lucky Nyre supports my dream of going out after storms; he’s also glad I’ll be back to help with our move! We packed a little more before watching the start of Game 2 of the Stanley Cup. I couldn’t stay awake to the end, but I saw all the first period goals and they would go on to win in overtime.

Thursday, May 30 | At 0800, Brenna and I jetted off to Jeff City. Over the course of the two hour drive, I found out that we have things in common like we both get cold easily, need the mountains to improve our mental health, and enjoy exploring the world of tea.

After a two-hour drive, we were met by the Missouri River overflowing before the bridge crossing into Jefferson City. The Jefferson City Memorial Airport was nothing but a lake and large advertisement boards sitting low over the farm fields were up to their wood legs in flood water. Though the state capitol is elevated above the river, the ground was so saturated that puddles turned roadside ditches into ponds, washed out intersections leading up to the capitol building, and crowded parking lots like afternoon high school band practices. Near our exit from US 63 onto Lafayette Street, we saw stripped and mangled trees hovering around the Capital City Apartments complex, nearby homes, and the junior high school, all with tarped roofs and boarded windows. It was just like the photos I’d seen online.

We arrived at The Linc, a large community center next to Jefferson City High School (which was also damaged during the storm). It was an hour before the MARC was set to open, and the couple dozen chairs lined up outside the door were already full. The sun was beating down and it was hot. Inside, we met the 5 ERT members who had been in Jefferson City since last Thursday.

Together with the Program Director, we ran the registration table where people first walked in. We collected basic information like the affected address and if that location is still livable, we looked up if the Red Cross had done a Damage Assessment (DA) of the property yet, and we asked what needs the residents wanted assistance with.

Some folks only needed food to replace what they lost in their refrigerator when the power went out for several days; others needed a new place to live because their mobile home had been destroyed by the tornado and the whole park was getting bulldozed in a few days. Some were, very understandably, eager to share their whole story and ask all their questions; others were clearly very tired and not sure if anyone at the MARC would be able to help them. I heard stories of landlords doing next to nothing to help their residents, while others seemed very involved in helping them out by waiving rent for June or promising a full return of deposits. One entire apartment had been condemned, bringing in dozens of people looking for a new home. Other stories came in that people had just paid off their car that week, and now it was covered in hail damage; a few people had moved into the apartment the same day the tornado hit.

Word came during the day that the Clarksville team had to sandbag for nearly 24-hours straight alongside the National Guard to hold back the river. In other news, bed bugs are suspected of spreading among the AmeriCorps houses. Merp!

The MARC came to an end and we headed out to Buffalo Wild Wings to watch Game 1 of the NBA finals, Warriors vs. Raptors. I was pretty drained from taking intakes all day, but it was nice to spend time with the team outside of direct service. We spent the night in Bennett Hall, a dorm at Lincoln University.

Friday, May 31 | After a relatively good night’s sleep, considering the springs were nearly protruding from the thin mattress, we grabbed a small breakfast made of hodgepodge granola bars, chips, Hostess sweets, crackers, and other snacks on the first floor. While foraging for breakfast, a Team Rubicon member asked us, “Are you AmeriCorps?” Upon our affirmative, he shouted, “Fantastic!” The power of the “A”!

Back at the MARC, registration setup was much easier and, with a shorter day ahead, I felt refreshed. Most folks at the MARC seemed to know what to do and things went smoothly. It also was not nearly as busy as yesterday. About 150 more households were registered.

On the way out of town, we caught more glimpses of stripped trees, boarded up windows, tarped roofs, washout intersections, scattered debris on the highway shoulders, and entire farm fields underwater.

We got back to ACSTL in time to catch the end of the Friday debrief. A few people asked me how I liked the MARC and I told them I was glad to get in on the action-packed week!

Exciting stuff, folks! My next post includes my second deployment to the far west side of Missouri. Check back again soon! 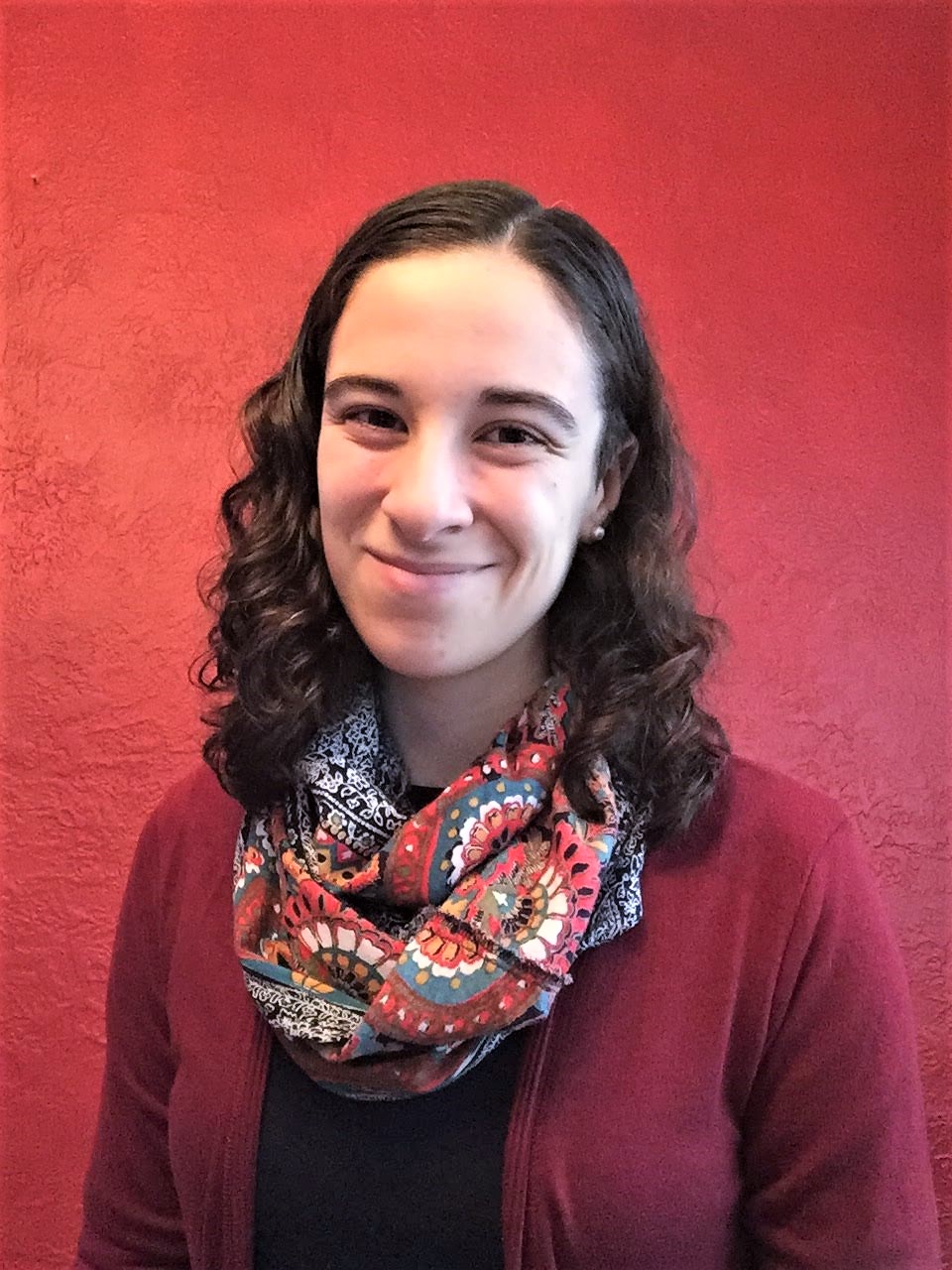 Ellen grew up in the suburbs of Chicago until she graduated high school and attended Saint Louis University ’15, in St. Louis, MO, where she earned her Bachelor’s of Science in Social Work (BSW). Her post-graduate adventures took her to Billings, MT, with Jesuit Volunteer Corps Northwest ’15-’16 – an AmeriCorps National partner – where she served as the School Program Specialist with Big Brothers Big Sisters of Yellowstone County. After acquiring her Master’s in Social Work from Tulane University ’17 in New Orleans, LA, and spending a short time working in Madison, WI, Ellen married her Billiken beau and returned to St. Louis to find meaningful work in disaster response.

Follow Semper Officium: The Call of the Corps on WordPress.com